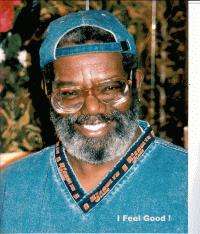 Visitation Saturday October 2nd from 10 a.m. until time of service 11 a.m. at Briscoe-Tonic Funeral Home 2294 Old Washington Rd Waldorf, MD. 301-632-6624 Ronald Baker was born to the late Christopher and Naomie Baker on July 20, 1941. On Tuesday September 28, 2010 quietly departed this life after a brief illness. He was educated in the DC Public School System. Ronn was very industrious and started work at 14 at the Haeringer Buffeteria where he was loved and nurtured by his “”Other Father””, Mr. Al Haeringer. After leaving Mr. Haeringers he went to work at Schaeffer’s Florist where he stayed for many years and learned his trade. He was known to many florists around the city and developed his own entrepreneurship (Party Planners). Ronn loved his own family and was constantly reaching out to expand it. There were 9 children including our adopted brother and somehow Ronn had Mom and Dad raising closer to a hundred and nine. He always wanted to look out for those who were at risk, He went back to school and took classes to tutor the illiterate and trained many into florists. Ronn was the ultimate big brother who loved family, neighbors and whatever neighborhood he inhabited. Ronn’s greatest love was his father’s hometown of Scotland Neck N.C. His love, his compassion will truly be missed by many. Ronn leaves to mourn a Stepmother Ruth Baker, 2 Sisters Gloria Hinton, Ruth (Jerome) Davis, a Sister in law Earlease Baker, 2 Brothers Henry Warfield, Tyrone Baker, 3 Foster sons Gil, Eric, Al, and a host of relatives and friends.

Offer Condolence for the family of Ronald Baker