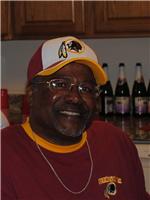 Robert E. Wright went home to be with the Lord on Monday, December 30, 2013. He was born in Washington, D.C. on June 26, 1949; the third child born to the late Sandy Wright and Ernestine Wright Thompson. He graduated from McKinley Tech High School, after which he served four years in the U.S. Navy. He attended Federal City College and worked at the Government Printing Office, where he retired as a Leader in 2004. Robert was married to his high school sweetheart, Hallue Clark Wright, for 43 years. They have two sons Robert Jr. and Richard Wright. He is survived by his devoted wife; two sons; his mother; brother, Sandy L. (Sharon) Wright; sister, Karen Wright; one grandchild, Kalen Wright; nephews, Sandy, Sean, Shannon, and Steven Wright, and Gregory Conway; and a host of other relatives. Friends may visit with the family on Wednesday, January 8, 2014, from 10:00 a.m. until time of the homegoing celebration at 11:00 a.m. at Victory Church International, 9308 Allentown Rd., Ft. Washington, MD. Interment Friday, January 10, 2014, 10:00am at Maryland Veteran Cemetery, Cheltenham, MD.

Offer Condolence for the family of Robert Wright