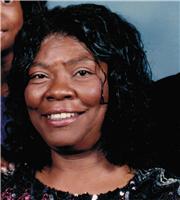 Pearl Richardson-Day, 75 of Great Mills, MD., entered into eternal rest on Thursday, May 16, 2013. Pearl was born on November 28, 1937 to the late Norman and Annie Richardson in Arlington, VA. She received her education from Hoffman Boston High School in Arlington, VA. She attended Mt Olive Baptist Church in Arlington, VA., where she was baptized as a child.
Pearl moved away with her three sons to Washington, D.C. She was employed with the Metropolitan Police Department for 17 years. During her employment with the Police Department, Pearl received numerous certificates and awards. After leaving the force, she moved to Lexington Park, MD and changed careers. She was employed for 11 years at the Naval Air Base MWR, Patuxent River, MD., at the Child Development Center, until her retirement.
Pearl married the love of her life, Samuel (Bud) Day, on May 18, 1974. From that union they adopted their beloved daughter, JoAnne.
Pearl enjoyed being in the Eastern Star Organization of St. Mary’s. She also enjoyed going to the casino with family and friends and collecting all sorts of jewelry. Two things you knew about Pearl is that she never, never left home without one, her jewelry and two, her Bud. She was a very caring and loving wife, mother, grandmother, sister, aunt and friend. She was a true Pearl. She also enjoyed spending time with her in-laws Link, Helen, Mae, Mike and Anna. They had some good times together.
In addition to her parents, Pearl was preceded in death by her son, Michael Madison; sister, Anna Hunter; brothers, Marion Harper, Norman, Jr., Clarence and Charles Richardson and her in-laws, Samuel and Florence Day.
She is survived by her husband of 39 years, Samuel (Bud) Day; sons, Guy (Dianna) of Las Vegas, William (Vickie) of Lexington Park, MD and Maverick (Viola) of Lexington Park, MD.; daughter, JoAnne Lingley of Florida; sisters, Peggy Hall of Hartford, Connecticut, Alice Correll of Lexington Park, MD, Sherry Williams of Temple Hills, MD and Cloret Ferguson of Quincy, MA; brothers, John and Harold Richardson of Hartford, .Connecticut, 21 grandchildren, 12 great-grandchildren; brothers-in-law, .Bernard and Charles Day of Richmond, VA, Leon of Lexington Park, MD.; sisters-in-law, Mary Morgan of Lexington Park, MD and Margaret Pittman of Richmond, VA and a host of nieces, nephews, family and friends.
Family and friends will unite on Saturday, May 25, 2013 for visitation at 10:00 am until time of service at 11:00 am at Briscoe-Tonic Funeral Home, 38576 Brett Way, Mechanicsville, MD.Interment will be private..

Offer Condolence for the family of Pearl Richardson-Day