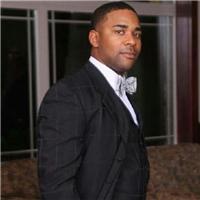 Michael Skylar-Jones Pegues died
May 12, 2013. He was born on November
22, 1988 in Alexandria, VA and raised
in Waldorf, Maryland. He is the son of
Frankie Elizabeth Estes, Ulysses Pegues
and Michael Dennis Jones. Michael had
an infectious smile that would light up
the room anytime he entered. He was a
“comedian” and loved to make his family
and friends laugh.

Michael graduated from Westlake High School in Waldorf,
Maryland in 2006 with honors where he played
football and ran track. Michael’s scholastic ability earned
him a four year Army ROTC scholarship. His athletic
ability enabled him to walk onto Virginia State University’s
football team where he excelled at quarterback and
defensive back.

While matriculating at the university, Michael became
a member of Omega Psi Phi Fraternity, Inc. He was initiated
into the Nu Psi Chapter on October 21, 2009. Michael
was a dedicated and loyal member of Nu Psi Chapter in
college and later in Omicron Pi Chapter, Killeen, TX.

Michael loved his family and was often referred to as a
“momma’s boy”. He looked forward to holidays and being
home to visit from the military. He served as a role model
to his younger brother, nephew and friends. His presence
will be missed but his spirit lives on. To know him, is to
love him.

Offer Condolence for the family of Michael Skylar-Jones Pegues