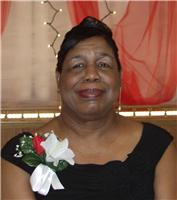 On Friday, January 31, 2014 in the early morning hours, our heavenly Father sent one of his angels to bring home our beloved Mary Dorothy.
Mary Dorothy was born March 9, 1943 to the late Francis Ford and Mary Dorothy (Chase) Barber in Hollywood, Maryland. She was baptized at St. John’s Regis Catholic Church in Hollywood, Maryland and raised in the Catholic faith alongside her siblings and extended family. She was educated in the St. Mary’s County Public School system.
Mary Dorothy will be remembered as a loving and caring wife, mother, grandmother, sister, cousin and friend. She loved being surrounded by family and friends; especially her five grandchildren. She enjoyed playing bingo, hand dancing, watching sports (especially the Williams sisters) and talking on the telephone with loved ones. Her infectious laughter will be missed by many.
On May 5, 1962 she was united in holy matrimony to the late Alton R. Thompson at St. John’s Regis. From this union they were blessed with four children.
Mary Dorothy was preceded in death by her loving husband; her sister, Clara Valentine and brothers, Joseph “Joe Boy”, Eugene “Jenks”, Wilmer “Bill”, John Sr., James “Buster” and Francis Barber.

Her memory will be forever cherished by her beloved children: Joyce Thompson-Berry, Darnell, Wendell and Deborah Thompson; five grandchildren, Jasmine and Anthony Berry, Cedric, Cameron and Camille Thompson; one sister, Eleanor Williams and four brothers, Ford Jr., Gilbert, Joe Louis and Ralph Barber. She also leaves to cherish her memory a host of nieces, nephews, cousins, extended family and friends.
Family and friends will unite on Tuesday, February 11, 2014 for visitation at 10 am until Mass of Christian Burial at 11 am at Immaculate Heart of Mary Catholic Church, 22375 Three Notch Road, Lexington Park, MD. Interment to follow in the church cemetery.

Offer Condolence for the family of Mary Dorothy Thompson