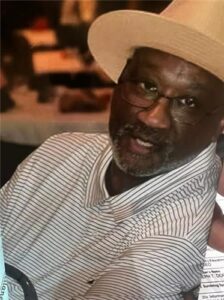 Joseph Wayne Lamar Dorsey, 62 of Temple Hills, MD (formerly of St. Mary’s County) departed this life on November 22, 2022. He was the youngest son of the late Joseph and Margaret Dorsey, born on August 15, 1960.

Lamar graduated from Chopticon High School in 1978. He was a member of the Chopticon Marching Band where he played the bass drum. He also played on the junior varsity basketball team and later became the varsity team manager.

Lamar loved sports. If sports was on the TV, he was watching it. He loved watching football, basketball, golf and even horse racing. On any given Sunday, he would be sitting on the couch or at the dining room table cheering on his football teams and telling the coaches what to do. Besides watching sports, Lamar loved watching cartoons on Saturday mornings.

Lamar would also watch cooking shows and then try out the recipe. Those who knew him, knew he loved to eat, which made him a pretty good cook. He also loved to dance. Folks would comment on how light he was on his feet for a big guy.

In the last few years, Lamar had become an avid reader. He made sure to keep up with all the current events and let everyone know what was happening in the world.

He was preceded in death by his parents; brother, Alton Thompson; Godson/nephew, Joseph Je Von Dorsey and niece, Dominique Jordan.

Offer Condolence for the family of Joseph Wayne Lamar Dorsey