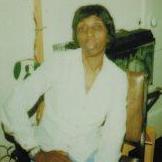 Edith Mary Carey, 104, (affectionately known as “Nannie” and “Miss Eddie”) of Lexington Park, Maryland passed away peacefully on January 9, 2012 at Hospice of St. Mary’s in Callaway, Md..
Family and friends will unite on Wednesday, January 18, 2012 @ St. Aloysius Catholic Church, 22800 Washington St., Leonardtown, MD. with visitation at 10:00 a.m. until time of service at 11:00 a.m. Interment immediately following at Charles Memorial Gardens in Leonardtown, MD. The Family will fellowship with friends at the Hollywood Rescue Squad in Hollywood, Maryland immediately after Interment.
Edith was born in Redgate, Maryland on November 25, 1907 to the late John Hopkins and Mary Hopkins. After Edith’s parents died at an early age, she worked for local families as a housekeeper and cook to care for her brothers Francis and Joseph Stanley. After Joseph died at the age of 5, Edith moved to Trenton, New Jersey in 1920, where she stayed briefly, but it never had the feel of home. She moved to Arlington, Virginia after a brief stay in Trenton. While in Virginia she met John Evans and from that union she bore two children, the late George Francis Hayden and Hilda Mae Hayden. In 1946, she moved back to St. Mary’s County where she met and married her late husband John Edward Carey.
Edith was employed at Leonard Hall School as a cook in 1948 and retired from there in 1969. After a brief hiatus, she went to work for the Sisters of Charity of Nazareth in 1970 and retired in 1982 after 12 years. At this time, Edith decided it was time to relax and enjoy her family. She helped raise every generation of her family and continued to play a vital role in nurturing her family until shortly before her death.
Edith loved to play a card game called “pitch” and for years played every Friday night with a group of regular friends. She loved to cook and could cook anything that you liked, especially stuffed ham. She loved her coconut cake that she looked forward to getting every year for her birthday and Christmas from her daughter-in-law. Edith had a garden for many years and loved to work “in the dirt” and grew numerous vegetables. She also enjoyed walking and could out-walk anyone. She pretty much walked everywhere she went. She would always say “walking would lead to a long life and that exercise was good for you. She never learned to drive.
Edith was preceded in death by her parents John and Mary Hopkins; her husband John Edward Carey; brothers John Hayden, Joseph Stanley Jones, Francis Edward Jones, and sisters Ada, Mattie and Lillian Hayden; her son George Francis Hayden; her grandson, Joseph Stanley Hayden; and her great-grandson, William Derreck Young. She leaves to cherish her memories her daughter, Hilda Hayden; five grandchildren, Mary Young and Karen (Sissy) Hayden of Lexington Park, Maryland, Patrick of Los Angeles, California, Darryl Keith Hayden of Newport News, Virginia and Beverly Galloway of Camp Springs, Maryland. She has nine great-grandchildren: Tiffanie Tinsley of Hyattsville, Maryland, Dwayne Young of California, Maryland, Warren Young, LaQuasha Hayden, Rashard Hayden and Vashon Hayden all of Lexington Park, Maryland, Darryl Monique Hayden of Newport News, Virginia, Crystal Hamlin and Rahmal Adams of Camp Springs, Maryland. She has thirteen great-great grandchildren, Imari Brandon, William Matheny, Davonna Young, and Jakari Young, Dasani Young , Khyri Wells, Daniel Perkins, Ayden Adams, Ja’cori Thomas, Rashard Hayden, Tyron Hayden, La’Niya Hayden and Darnajah Warrick. She also leaves a niece Gertrude Hayden of Leonardtown, Maryland and two great nieces Doris Chase of Lexington Park, Maryland, Shirley Brooks Briscoe of Temple Hills, Maryland and two great nephews, James (Buddy) Curtis and Joseph (Joe Duck) Mitchell. She is also survived by one very special daughter-in-law Cecelia Hayden-Smith of Washington, DC and a host of other relatives and friends.


Offer Condolence for the family of Edith Mary Carey