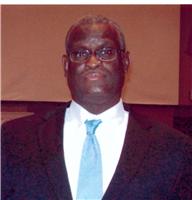 Earl Thomas White was born January 1, 1955 at Garfield Hospital in Washington, DC. He was the third of five children born to George and Florence White. He grew up in the Georgetown section of Northwest DC. He attended Stevens Elementary, Francis Jr. High and Western Sr. High schools.
Growing up Earl could be often found on the basketball court of Francis Jr. High, which was down the street from his home, with his best friend (and shadow) Stanley Wiggins. After high school he worked at many jobs but mostly in construction. He loved to watch old Cowboy Western movies and listenting to old Mowtown music.
He moved to the Waldorf, MD in 2002. Earl was always there to lend a helping hand unselfishly, whenever called upon, even until the end.
Earl Thomas White departed this life on Tuesday October 2, 2012 at Southern Maryland Hospital. Earl was preceded in death by his parents, George and Florence White, grandmother, Virginia White, and sister Evelyn White.
He leaves to cherish fond memories, two sisters JoAnn White Hunt, Regina White, one brother Randi White, brother-in-law Pastor Willie R. Hunt. He also leaves his nephew, Maurice Hunt and his wife Alaina, and their children, Simone, Stephen, and Shane, his nephew Michael Hunt and his wife Latashia, and niece Kimberly Hunt, and a host of relatives and friends. Visitation will be at 10:00 a.m. until time of Service at 11:00 a.m. on Saturday, October 6, 2012 at New Community Church of God in Christ, 12435C Mattawoman Drive, Waldorf, Maryland 20601. Interment following at Heritage Memorial Cemetery, Waldorf, Maryland.

Offer Condolence for the family of Earl Thomas White