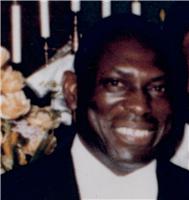 I have fought the good fight; I have finished the race,
I have kept the faith. 2 Timothy 4:7

On Jan 31, 2013, Clinton took God’s hand as he led him home where there will be no more pain and suffering. Clinton was a Christian and lived a full life. He was born June 3,1936 in Hemingway, South Carolina to the late Bertha and Arlington Walker. He was educated in the schools of Georgetown County, South Carolina.

In the late 1950’s Clinton moved to Washington, DC where he met the love of his life Bernice. They united in holy matrimony in 1961. Out of this union they had two children; Loretta and Herbert.
Clinton and Bernice joined Brown Memorial A.M.E. Church in the early 60s.
He was a faithful and dedicated Steward for over 35 years and also was a member of the Men’s Choir, Celestial Choir and the Mass Choir.
Clinton had a love for animals and was a groomer at the Friendship Animal Hospital in Washington, DC until he retired in 1991.
He was also a long time member of the Straight 8 Social Club where he was an active member for years.
He leaves to honor his memory one daughter, Loretta Gamble; one son, Herbert Walker; two grandchildren, Jamahr Richards and Tiara Smith. two great-grandsons, Khyree and Jaylen Richards; three nieces, Joann Appol, Rev. Debra Grant and Sandra Frayer; two nephews, Derrick Frayer and Patrick Grant; two sisters in-law; Edna Ford and Marie Stephens; one brother in-law; John Henry Nelson; four godchildren, Linda Jacobs, Frankie Tawanda Pressley, John Kersey, and Michael Kersey; a special friend; Geneva Chadwick and a host of other relatives and friends.

Offer Condolence for the family of Clinton Allen Walker