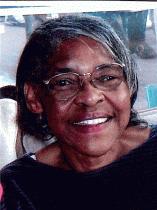 Bessie Mae Myers of Bryans Road Maryland departed this life on earth and went to be the Lord on Thursday, September 9, 2010. Miss Bessie as many called her was born on October 26, 1940 in Jasper County, Georgia. She was born to the late Garfield Franks and Sallie Goolsby Franks. Bessie’s family moved to Louisville, Kentucky while she was still a young child. The family became members of Good Hope Baptist in Kentucky. Bessie gave her life to Christ at an early age; she was baptized at Good Hope Baptist Church. Bessie graduated from Central High School in Louisville Kentucky.In 1969 Bessie met Ronald Myers in Wichita, Texas while she was working as a nurse’s aide in a local hospital. They were married on November 5, 1969 in Benton, Arkansas. To this marriage, a daughter, Keisha Myers was born. Bessie was a faithful Air Force wife until Ronald Myers retired from the military.While traveling all over the United States as a military family, they finally settled in Fort Belvoir, VA. Bessie worked in Fort Belvoir at the Post Exchange as a customer service sales representative for many years. She also worked at Boling Air Force Base as a manager until her retirement. Bessie was a blessing to all that she came in contact with. In her earlier years, she loved to sing in the church choir. She was a member of the Golden Echoes Gospel group and the Melody Queens. Finally settling in Maryland, Bessie was a faithful BINGO player and spent most of her free time playing BINGO with her friends. She was a great wife, mother and grandmother to her family and her extended family. She could often be seen following her Crimson Heat family on the cheerleading circuit. Bessie leaves behind a devoted ex husband and best friend, Ronald Myers. She is survived by her loving daughter, Keisha Myers and granddaughter, Kieana Myers. Bessie was preceded in death by her sisters, Eulah Stanley and Osia Smith and brothers, CT Franks and Harvey Franks. She leaves behind sisters, Fairlee Ford and Christine Latimore. She also leaves behind a host of sister-in-laws, brother-in-laws, nieces, nephews, relatives, extended family members and friends.

Offer Condolence for the family of Bessie Mae Myers