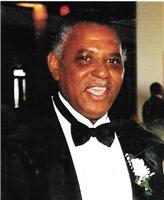 Baron Horrace McFarland, affectionately known as “Mack” or “Baby”, but most lovingly, “My Boo”, was led by the angels to his heavenly rest on Friday, August 21, 2015 while a patient at the University of Maryland – Charles Regional Medical Center in La Plata, Maryland. Mack was born September 30, 1943 in Hartsville, South Carolina; he was the 13thchild of the late Leila and Townsend McFarland.

Mack graduated from Rosenwald High School in Society Hill, South Carolina. After graduating from high school, he served in the U.S. Army from 1962 to 1965. Mack retired from Pepsi Cola after 27 years of service. He then became a distributor for Tastee Kake and Ottenberg Bakery. He met and married Linda Jordan on December 5, 1997 in Alexandria, Virginia and have made their home in Hughesville, Maryland.

Mack will surely be missed, but the Lord knows best and gave him peaceful rest.

Family and friends will unite on Saturday, August 29, 2015 for visitation at 9:00 am until time of service at 10:30 am at Briscoe-Tonic Funeral Home (Frances Briscoe Chapel), 38576 Brett Way, Mechanicsville, MD. Interment to follow at St. George’s Catholic Church Cemetery, Valley Lee, MD.

Offer Condolence for the family of Baron Horrace McFarland